For anyone who has followed stock car racing in the United States for any reasonable length of time, it's not hard to look up and down the drivers for the top three series and recognize a multitude of family connections within the sport spanning as much as eight decades or more.

I wonder which family in which sport can claim to have the largest amount of professional representation within any sport ever? Maybe it's a racing family, I don't know.

So in three parts I aim to cover some of the "Family Affairs" in the top three series of NASCAR. Starting with current drivers and a little bit about famous cup families of all time.

Chase Elliott: Starting at the top, current Cup Series champion Chase won his first championship in 2020 and is the only son of another one time winner Bill Elliott. Bill won the Cup Series Championship in 1988. The father and son partnership are third to have both won championships along with Lee and Richard Petty, and Ned and Dale Jarrett.

Kurt and Kyle Busch: Kurt is the older brother of former champion Kyle by around seven years. The siblings can boast three cup championships, Kurt winning in 2004 and Kyle winning in 2015 and 2019. Kyle also lays claim to the 2009 Xfinity Series, while brother Kurt is the only one to win a rookie of the year award in the Truck Series in 2000.

Austin Dillon:  Austin is the grandson of Richard Childress, his father Mike is the general manager of RCR and his younger brother of cup driver Ty Dillon.

Ryan Blaney: Ryan father Dave Blaney was both regular and part time on the cup series circuit between 1992 and 2014, with minimal success but everyone knows getting to that stage is a win in itself. Dave's father and Ryan's pawpaw was Lou Blaney, a Dirt Track legend winning 600 races over a period of 47 years. All three generations have been born in Hartford Township, Trumbull County, Ohio.

Corey LaJoie: Corey is the son of two time Xfinity champion Randy LaJoie. Father Randy won rookie of the year 1983 Nascar North Series and last ran in 2005 in the 500 at Martinsville. It's easy to consider Corey a new face but he first ran cup in 2014, with little to show, rushed up through the Truck and Xfinity series and was once a development driver for Petty Motorsports. At 29 he has a good decade or more left in him, any driver at his level should take heart from Michael McDowell's Daytona triumph.

Chris Buescher: Chris has taken strides to prove himself a driver. After winning rookie of the year for ARCA in 2011 he won that championship in 2012. He also made his debut in Xfinity in 2011 and won the championship in 2015. Chris's cousin James Buescher is two years his elder at 30, he won the NASCAR Truck series in 2012. Cousin James was born in Melbourne, Australia and raised in Plano, Texas.

Chase Briscoe: One thing I have noticed from this years broadcasts, Briscoe's name seems to be on every pundits lips. My home state is Indiana so I can't not root for him. It's time the state had another big name. Father Kevin Briscoe ran in the NASCAR Truck series. Grandfather Richard was a team owner, three generations of Briscoe have been heavily involved in dirt track racing. Richard was formerly a team owner for driver Dave Blaney. Chase was 2016 ARCA champion and owns a team in World Of Outlaws Sprint series.

The Wallaces: Brothers Randy, Kenny, and Mike have all run in the top series. Rusty was a long time driver for Penske in the No.2 now driven by Brad Keselowski. Rusty's son Steven Wallace has run in both Xfinity and Cup Series. Mike Wallace has two racing children, daughter Chrissy Wallace has driven ARCA and Truck Series while son Matt has ran in ARCA and Xfinity series. Father of the brothers Russ was also a prolific race driver.

The Burtons: Brothers Ward and Jeff Burton ran in the cup series from 1993 until 2014 with Jeff retiring in 2014 and Ward in 2007. Jeff's son Harrison and Ward's son Jeb Burton both currently run in the Xfinity Series.

The Bodines: Sounds like a good band name? Geoffrey Bodine was so keen to race in anything as a child he started racing at the age of 5, when he was 15 years old he put on a dress and ran in a Powderpuff Division. The older brother of Brett and Todd Bodine, Geoff had a fierce rivalry with Dale Earnhardt. All three brothers have run in the Cup Series, Todd Bodine is a two time Truck Series champion.

The Pettys: The Petty Family can boast the most Cup Series Championship wins for one family. Lee Petty won three championships in 1954, 1958, and 1959. His son Richard Petty is probably one of, if not the most famous personalities in stock car racing history. Richard won seven championships and is tied with Dale Sr. and Jimmie Johnson. The Petty race is team is one of the oldest in NASCAR alongside Wood Brothers Racing and also included Richard's son Kyle Petty. While Lee was famous for the No.42 car, Richard Petty made the No.43 car one of the most famous and most recognizable in the sport. Kyle's son Adam also drove in NASCAR and sadly died during practice at New Hampshire in 2000 aged 19 having made on Cup Series appearance at Texas Motor Speedway.

So many more: Allisons, Waltrips, Labontes etc etc, I'll save some ammo for later or this blog will become too long. In Part II we'll switch up the style and find some family and series trivia. See how much you can remember about Cup Lite!

If you have an idea for a racing related story from any format, leave comments below. If you didn't like this story let me know why. Leave your own stories and connections.

Yeah I am late to the show on this one. Released by Chassy in 2018 and available on Netflix. What a show though! If you love Racing and have yet to watch it, you will be entertained.

My knowledge of Willy T was minimal up until watching this, I had recently got around to researching him again when someone pointed out there was a movie about him that I was unaware of. Up until now I had known of his IndyCar exploits and that he was an SCCA Trans-Am Series driver and I had made a mock up of his No.28 Camaro on Forza Motorsport. I had literally no idea how he was as a driver however.

In typical biographical documentary style everything you expect to be there is there, great footage and photos along with a host of hugely famous names from the racing world. Many of these names are commentators throughout including Willy T. Ribbs himself along with Bobby Unser, Wally Dallenbach Jr, David Hobbs, Donald Davidson and, Bernie Ecclestone. Caitlyn Jenner also appears having drove as Bruce Jenner in 1980's SCCA Trans-Am Series. Other notable names appearing in the film Paul Newman, Jack Roush, Muhammad Ali, Don King and Bill Cosby.

The story is incredible in its entirety, beautifully edited and chronologically ordered. The people interviewed and the footage included are what make it so engaging. Whether it is Will from "Then" or Willy from "Now" the passion for the sport is obvious and oozing. Willy was not just another African-American driver who set standards by just taking part. Willy could race, not only that he could race anything and probably finish on three wheels. This is the story of a driver with obstacles who got over them by winning races.

IMDB has an average rating of 8/10, for me as a race fan it's definitely a 9/10. Up until viewing this my favorite movie of the same type was "Senna". Uppity has knocked it off the top, mainly because the racing involved and the characters who appear are more relevant to me.

Check it out! He is still getting behind the wheel aged 66 and long may he continue. I could rave about this film a lot more, but no spoilers from me!

Chase Elliott and father Bill have won one Cup championship each. By: James Cormack For anyone who has followed stock car racing in the Unit... 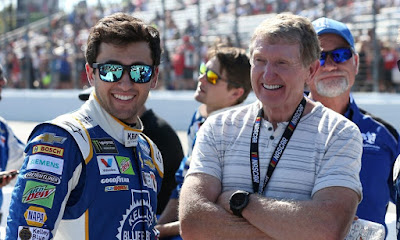